2023 Pledge Forms are now Online! On the Menu, go to Donations/Pledge Form, OR EVEN EASIER - Pledge via PayPal TODAY!

Here's some info to get started learning about the authentic Christianity of the Ancient Faith!

St. Anthony Orthodox Christian Church is thoroughly Christian, steadfastly Trinitarian, and in full communion with the rest of worldwide Eastern Orthodox Christianity, which has about 250 million members. Only 1 million Americans are Orthodox, but that number is steadily growing as more and more people are becoming dissatisfied with the shallowness of "feel-good" Christianity-lite where Jesus is merely your "buddy" who just wants you to be happy and prosperous. Many such dissatisfied Christians are now seeking a deeper, authentic, historical and meaningful relationship with Christ. St. Anthony is under the Patriarch of Antioch - the first Church of the Gentiles (see Acts 11:19-30). For the last 2000 years, without any interruption and without corruption, we have practiced this Ancient Faith the way Christ's Apostles Barnabas, Paul and Peter taught us to - without addition, and without subtraction.

May God the Father, His Only-Begotten Son, Jesus Christ, and His Holy Spirit - who is One God - guide your journey and protect your steps.

A Bit of History

To the average American, Orthodox Christianity is foreign. The term "Orthodox" is often associated with Judaism, and the huge gold dome adorning the top our Church resembles that of a mosque. (Actually, it was the Ottoman Empire's Islamic Turks who conquered the Eastern Roman Empire or Byzantium, captured our beautiful domed Churches, knocked the crosses off, and made them into mosques - they quite literally stole our Christian domed architecture.) The only common denominator among Judaism, Orthodoxy and Islam is that each one is monotheistic - we worship One God. The differences are how we understand God's nature (who God is), and how we are to worship God.

It was at the end of the Feast of Shavuot, on Pentecost*, in 33 AD - the day of the Coming of the Holy Spirit into the hearts of man, that the Orthodox Church was established as we know it today. Over the past millennia, Western Christianity has experienced a crescendo of schisms and splits, starting with the Great Roman Schism of 1054 and later the 16th Century Protestant Reformation, which has shattered Western Christendom into thousands of denominations and sects. However, throughout its vast two millennium history, the Orthodox Christian Church has maintained its Apostolic unity in both doctrine and practice, and it's love for God and for one another, just as Christ prayed for His Church: "that they may all be one; just as you, Father, are in me, and I in you, that they also may be in us..." (John 17:21a) 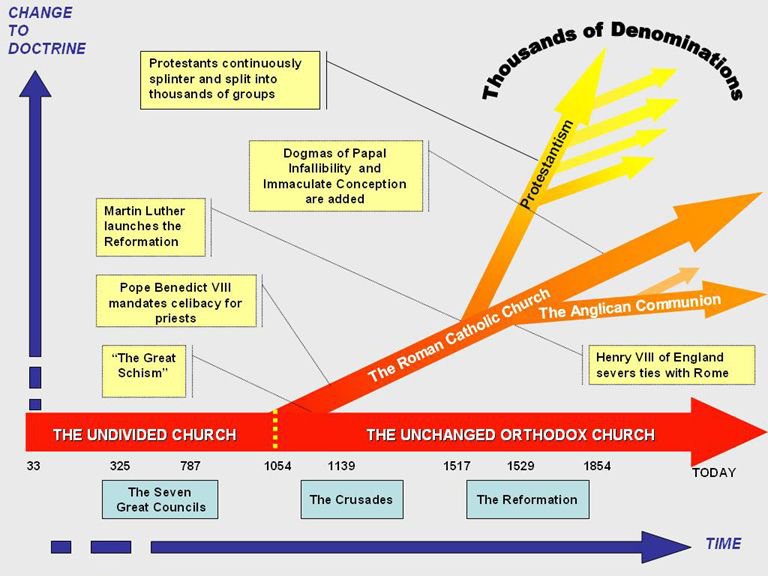 * A Catechumen asked of the meaning of the Jewish Feast of Pentecost, and how it was significant to the coming of the Holy Spirit. A brief explanation follows for anyone interested:

One of the ancient Jewish feasts is Shavuot, the Feast of (seven) Weeks. On the first day of Shavuot, sacrifices the first-fruits of the God's gift of the wheat harvest were made at the Temple. On the final day of Shavuot, the day after 7 weeks, the barley harvest is celebrated and the first fruits of barley are offered as sacrifice. This 50th day also came to commemorate God's giving of His Law (the Torah) to His people through Moses on Mt. Sinai. Now, the Hellenized Jews in Christ's time, who returned to the Holy Land from their diaspora, mainly spoke Greek, the worldwide common tongue of the time thanks to Alexander the Great. It is natural then that they called this 50th day of Shavuot "πεντήκοστος" or "pentikostos" - which in Greek simply means "fiftieth". The first day of Shavuot is the Day of God's gift of First Fruits, the same day as Pascha (Easter), Christ's glorious resurrection and His becoming the first-fruit of God's gift to all mankind of our blessed assurance of resurrection. The fiftieth day of Shavuot remembered again God's gifts, but it celebrated God's gift of His Law. It was on this fiftieth day of Pentecost that the Holy Spirit entered into the hearts of man, first to the 12 Apostles, the first Bishops of Christ's Church, who then like Moses brought this Gift to God's people. Thus it was that Christ's command came to fruition: Layering on top of Christ's answer to "What is the greatest commandment in the Law?" (Matt. 22:36-40), Christ said "A new commandment I give unto you, that you love one another; just as I have loved you, you also are to love one another." (John 13:34). This is a basis of our understanding of God's all-loving nature, and the foundation Christ built His Church on: love.

The word "liturgy" comes from the Greek "liturgia" which means "the work of the people." Our primary work as servants of the Most High is to worship Him.

﻿We describe the Divine Liturgy as Heaven coming down to earth, and the Church becoming an outpost of Heaven on earth. We sincerely believe that the Lord is present, as are His saints and angels. We no more worry about the question "How many saints and angels can fit into an Orthodox Church?" than we worry about "How many angels can dance on the head of a pin?" The answer is obvious: "As many as God desires." (We assume it's crowded.) The Divine Liturgy is an extension of the Jewish Second Temple worship at the time of Christ and its fulfillment in the Heavenly worship described throughout John's Revelation. Orthodox worship style is without reasonable argument the highest liturgical form in all of Christendom. The next closest would be the "high-church" Anglican and Lutheran liturgies which are ultimately derived from our Ancient Liturgies, and (for those who still remember it) the Roman Catholic pre-Vatican II Latin Mass. The two main Liturgies we Antiochian Orthodox use are those of St. John Chrysostom (+407 AD) and St. Basil the Great (+379).

These Divine Liturgies are entirely sung and chanted using only that musical instrument which God created with His own hands - the human voice. Some have likened the entire Liturgy to a single long a Capella hymn, and we would not disagree with that. The sound is angelic. Because we use the worship style from the Byzantine Empire era, it still has a somewhat Mediterranean or Middle-Eastern flavor. This is certainly different from most Protestant and Vatican II churches. After many prayers and hymns, and the Epistle and Gospel readings, there is a sermon which is much shorter than those of most Western churches. After the sermon comes the high point of the entire Liturgy - the Eucharist - where the Orthodox members who have confessed their sins partake in the Body and Blood of Christ.

[CLICK HERE] or on the button below to watch the whole series of short YouTube videos (in their proper order) on Orthodox practices and beliefs by Frederica Mathewes-Green. We would recommend watching these before you come to an Orthodox Divine Liturgy - they do a wonderful job of explaining Orthodoxy in small pieces, so it's easy to squeeze them into a busy lifestyle. The videos will open a new browser tab.

The cards below will take you to other pages on this site which you may be interested in.

What the Orthodox Church believes about God, the Bible, and the Church

Our History as a Church Family

Who We Are & Schedule of Services and Events

Nope, we don't shuffle them off elsewhere...

Differences between Orthodoxy and Protestantism

Differences between Orthodoxy and Catholicism

Back To Home Page

St. Anthony is located in north Houston, on FM 2920, a mile east of the Grand Parkway and six miles west of I-45.

Thanks to InterServer.Net for providing Hosting Services!